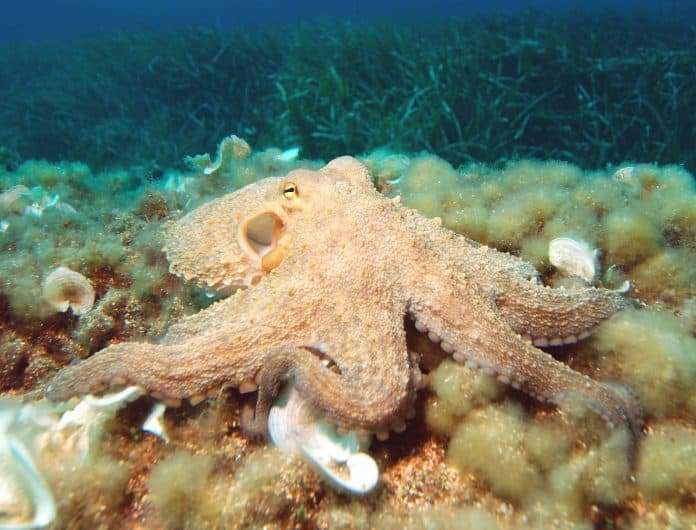 The common octopus (Octopus vulgaris) is a mollusc belonging to the class Cephalopoda. Octopus vulgaris is the most studied of all octopus species. It is cosmopolitan, that is, a global species, which ranges from the eastern Atlantic, extends from the Mediterranean Sea and the southern coast of England, to the southern coast of South Africa. It also occurs off the Azores, Canary Islands, and Cape Verde Islands. The species is also common in the Western Atlantic. The common octopus hunts at dusk. Crabs, crayfish, and bivalve molluscs (two-shelled, such as cockles) are preferred, although the octopus eats almost anything it can catch. It is able to change colour to blend in with its surroundings and is able to jump upon any unwary prey that strays across its path. Using its beak, it is able to break into the shells of shelled molluscs. Training experiments have shown the common octopus can distinguish the brightness, size, shape, and horizontal or vertical orientation of objects.

Are you a supplier of Octopus? Contact us to be featured on this page.

The common octopus has world wide distribution in tropical, subtropical and temperate waters throughout the world. They prefer the floor of relatively shallow, rocky, coastal waters, often no deeper than 200 m (660 feet). Although they prefer around 36 grams per liter (0.0013 lb/cu in), salinity throughout their global habitat is found to be between roughly 30 and 45 grams per liter (0.0011 and 0.0016 lb/cu in). They are exposed to a wide variety of temperatures in their environments, but their preferred temperature ranges from about 15 to 16 °C (59 to 61 °F). In especially warm seasons, the octopus can often be found deeper than usual to escape the warmer layers of water. In moving vertically throughout the water, the octopus is subjected to various pressures and temperatures, which affect the concentration of oxygen available in the water. This can be understood through Henry’s law, which states that the concentration of a gas in a substance is proportional to pressure and solubility, which is influenced by temperature. These various discrepancies in oxygen availability introduce a requirement for regulation methods.

Primarily, the octopus situates itself in a shelter where a minimal amount of its body is presented to the external water. When it does move, most of the time it is along the ocean or sea floor, in which case the underside of the octopus is still obscured. This crawling increases metabolic demands greatly, requiring they increase their oxygen intake by roughly 2.4 times the amount required for a resting octopus. This increased demand is met by an increase in the stroke volume of the octopus’ heart.

The octopus does sometimes swim throughout the water, exposing itself completely. In doing so, it uses a jet mechanism that involves creating a much higher pressure in its mantle cavity that allows it to propel itself through the water. As the common octopus’ heart and gills are located within its mantle, this high pressure also constricts and puts constraints on the various vessels that are returning blood to the heart. Ultimately, this creates circulation issues and is not a sustainable form of transportation, as the octopus cannot attain an oxygen intake that can balance the metabolic demands of maximum exertion.

O. vulgaris is caught by bottom trawls on a huge scale off the northwestern coast of Africa. More than 20,000 tonnes (22,000 short tons) are harvested annually.

Keep up to date with posts, news, offers and more.

Keep up to date with posts, news, offers and more.